“What is the moment in history you would like to witness in person.” ~Jerry Seinfeld to Ricky Gervais

I loved the responses from my Facebook post on February 9, 2018, to the above question: Jen: “Elvis 68 Special in Studio”, that makes me feel old, I was already born then!! In an email from a friend: “When Moses parted the Red Sea.” In a conversation with my husband, “Wow, I don’t know!” My neighbor Judy, “The signing of the Declaration of Independence.” My faraway rely by marriage Patricia, “Jesus Christ teaching.”Mary: “The Lewis and Clark expedition.” What a powerful question and I still can’t believe that came out of Jerry Seinfeld’s mouth to Ricky Gervais! It just goes to show history touches all of us in different ways!

What is the history of these two wild stallions, who live in a wilderness area in Wyoming named after a cowboy who arrived in 1879 driving 2800 cattle and was trail boss to a crew of eight men and a cook? 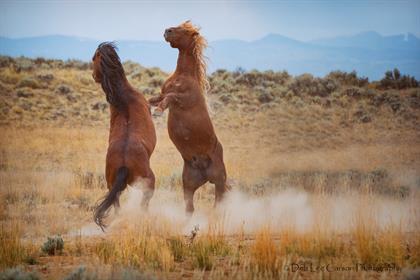 The first cattle roundup of all the stockmen in that area was to be held in 1881, and at a meeting at the Pitchfork ranch, it was decided for uniformity to name various landmarks around the country, so in 1881 McCulloch Peaks was named after the trail boss cowboy, Peter McCulloch.

McCulloch spent over twenty years working Wyoming ranches in the Big Horn Basin area.He was from Scotland, born there in 1839, descended from royalty but not wealthy, lived in the Cardoness Castle until April of 1853 when his entire family (mom, dad, a brother and four sisters) departed from Liverpool England on a ship called The Great Western, Peter was fourteen.

McCulloch began working for Judge William A. Carter sometime in 1864 after having fought in the Civil War and surviving several encounters with Native Americans while working on a survey party for the Union Pacific railroad responsible for the horse camps.

On top of the second highest peak in the wilderness area named after him lies a bronze survey marker encased in concrete, the survey marker bears the name McCulloch, 1950.

Have an amazing weekend in your part of the world! Thank you from the bottom of my heart for all your support and when you hit the share button, ‘assume’ that my heart is in the right place and the authors listed below have diligently done their research!