Little did I know when I left in late June of 2015 that I would be back for another round of research as a tech for CSU in 2016. I did see Pinnacles again, in November when we were back in the park collecting fecal samples on all the mares. She was hairy, as all the weanlings were, and not as cute as she was when I left! They go through that stage where you wonder where the cuteness went to hide! I saw her again in February during a pre-scouting trip for our first week on the job in March. All the horses were present and accounted for and we arrived on March 4th, the same CSU research team, Lincoln, Melissa and I, and we hit the ground running.

Foals were arriving fast and furious, the first one was born before we arrived on February 25th and his name is Dakota, found by Neali Austin, NDBH Instagram Guru, and wild horse lover since a teenager, talented photographer and dear friend. Then in rapid succession the babies started hitting the ground and we jumped right back into our weekly rhythm. Again Blaze was up to his old habits, he was in his old haunt on the Upper Talkington but with a slight twist, he was hanging around Thunder Cloud, Sidekick, Mystery, and Cocoa! Hmmm…that seemed a bit odd! Where was that feisty, aloof stallion I had known from before?

The days were flying by and there was a capture scheduled for the week of April 4th.

After the successful Fly Without Wings event in October of 2015, my husband and I had plenty of inquiries, “When are you getting a wild horse.” Believe me it was in the back of my mind and I would run through all the 2015 foals in my head and wonder what if! What if and who would it be? But I also knew owning a wild one would not happen, if at all, until late in 2016 or maybe not until 2017, due to the goals and commitments in our lives. We had our hands full this year, so I resigned myself to that and continued to focus on the tasks at hand.

Blaze’s behavior continued to be quite different from last year. Instead of being isolated and hard to find he had moved to the interior, then to Boicourt, and then of all places along the loop road at mile mark 24. I couldn’t believe it!!! Several of the bands were in places they haven’t been since 2009. Was it because of the dry weather and lack of snow and early spring? The entire foaling season was a bit out of whack too, foals arriving several weeks early or several foals being born to the same band on the same day! It was a head scratcher but one of the most intriguing things for me is band behavior so I wasn’t complaining.

The week of April 4th arrived and the first capture went like clockwork, out came beautiful Cascades. The next day I went out to scout early and found Copper at mile mark 18 and texted to let the crew know. Shenandoah could easily be captured. Well this is where fate takes a turn. Blake texted back and said Blaze was on the loop road at mile mark 23. Oh….as the air sucked out of my sails. I headed there. Again a very successful capture and off Pinnacles went to the handling facility, my heart going with her. We finished the week out with Tortugas. Three beautiful fillies would go up for adoption the very next week.

On April 12th, the fillies found their new homes—Cascades to an awesome couple in Northern Minnesota, Pinnacles to a sweet lady from Ontario, and Tortugas to a lovely, young woman from Montana. Arrangements were made for being picked up and our jobs as techs swung back into action! Part of our job is to feed the yearlings while they are at the handling facility. We would take turns, and it was hard to go in and see Pinnacles knowing she was going so far away. She would nicker when I would pull up outside the pens and when I went into feed she would quietly watch me and as soon as I gave her hay she did not hesitate to walk up and start eating. I would study her and see her beauty and oh that mane and tail, she was going to make
the wild ones of TRNP proud in Canada.

Now fate steps in again in only the strange way she can. Pinnacles ride to Ontario had a hiccup and to make it easier for her new owner and less stress on Pinnacles arrangements were made to get her to Bob and Deb Fjetland’s in Minnesota. This would break her long trip into several days giving her a chance to rest. So off she went, with Marylu and Henry Weber, for a respite in Minnesota until going on to Ontario.

A few days after she arrived in Minnesota (she is now only 25 miles from our house) I find out she may or may not be going to Ontario. What? Hmmmm….how can that be? On Friday of that week, at noon would be the final answer. OMG…now what…oh I said that already? What if Friday comes and she is going to be put back up for adoption? So I went inside my head and spent a lot of time there, and then I decided my head is not the best place to be and went inside my heart to find the answer, and then I started to pray. Still resigned to the fact that she is going to Canada.

Everyone who knows me and my undying smittenness with the pitter patter stallion, Blaze, knew the agony I was in, except for my husband. I had not shared any of this because if she did come back up for adoption how could we honestly pull it off? Nothing had changed in the short amount of time since the first adoption. Noon on Friday came and I get a message, Pinnacles will be available for re-adoption the following Tuesday at 7pm.

Are you sitting down? Well I had to. I sat for a very, very long time, went back inside my heart, and then I started to write. All the reasons she should be with us. There were many, I looked at the pros and cons, the ups and downs and then Saturday morning I emailed my plea to my husband, and put it in God’s hands.

At this same time I had an amazing group of women coming to the park to spend several days on a spiritual journey! Sweet and amazing women! Six of them. Jeanne, Cathy, Maggie, Donna, Lynn, and Marsha. At dinner Sunday night, I brought them up to speed on my life and of course I shared the saga of Pinnacles. They were all about trying to help me, do a Gofund me, etc., but not realizing there were only a matter of hours before the auction. “It’s okay girls”, I said, “this one is out of my hands.” Also in the park at this time, was another dear friend, Lynn, and Pinnacles was one of her favorites. Lynn was in the park the week Pinnacles was captured. Lynn, however, was not aware that Pinnacles life did not involve going to Canada. In addition, one of
my favorite people, a friend named, Robin, was here in Medora, staying with Doug and Mary, where I had just moved to.

Sunday I talked to my husband and now we start the husband and wife dance. (You married peeps know what I mean.) I got the sense from a couple of things said, it’s not going well, but there’s hope. So I send another email, with more ammunition in support of my reasons.

No word from Michael on Monday and Tuesday morning arrives and the auction is set for 7:00 that evening CST, that means 6:00 here in Medora. Still no yes or no from my husband. At 4:00 that afternoon I sent a text which prompted a call which got the yes!!! With stipulations and bidding limits! Alerting all the interested parties, one of which were the six on a trip to Wibaux for dinner, I came up to my room to wait. Everyone around me knew what the bidding limit was, except for Lynn, who still didn’t know Pinnacles is being re-adopted.

Sitting in my room, logged into Facebook, as that is where the auction takes place, taking a lot of deep breaths, I get a text from a friend asking if Robin is with me. No! “Well get her!” the text said. I ran downstairs grabbed her, she plopped on the bed behind me and I handed her my phone and I said you are in charge of communications.

Right before bidding started, based on the interest I was seeing, I asked her to send Michael a text asking him to raise the limit. When Pinnacles was auctioned the first time she brought $350, the base adoption fee, and only one person bid on her. Now there were three of us vying for her! Yikes! My stomach was in knots!!! The bidding started and it was fast and furious.

We were getting close to our limit when a text comes in from the six, and it said “we are in for $250!” I said to Robin, “Are they for real?” Yep!!! The bidding continued and another text from the six, adding another $50, then another for $100, they were texting Robin who was in control of my phone as fast as the bidding is going up! (I am thinking to myself, how do they know when to chime in more money?) A Facebook message pops up from a faraway friend with the words, “My offer still stands”, and then Lynn texted and asked if I was in the park. Me to Robin, let her know I am trying to purchase Pinnacles,Robin to Lynn explaining the situation and then Robin to me from Lynn, “I am in for half.” Lynn was sitting next to Blaze’s band when she texted.

Are you breathing yet?

Robin did the math and we were gold, so we kept on bidding! Back and forth the bids went, now between just two of us, with one lull when Marylu the auctioneer typed, “Any more bids?” Boom—back at it. It kept climbing. Finally there was another lull and we are holding the last bid, when Marylu again types:

Those were the longest 30 second interludes of my life and the noise that erupted from my room and little did I know until later, the restaurant in Wibaux, was deafening! Mary came running with beers and we all did the happy dance! Congratulations and love flowed fast and furious from everyone who watched and participated in the bidding on Facebook.

So now Michael and I are responsible for a community! A community named Pinnacles, named after a place Born of Fire, born of a smokin’ hot sire, Blaze, and sweet little mare, Domino, and made possible by the love and support of so many amazing and gifted people who believe in the spirit of these incredible wild ones! 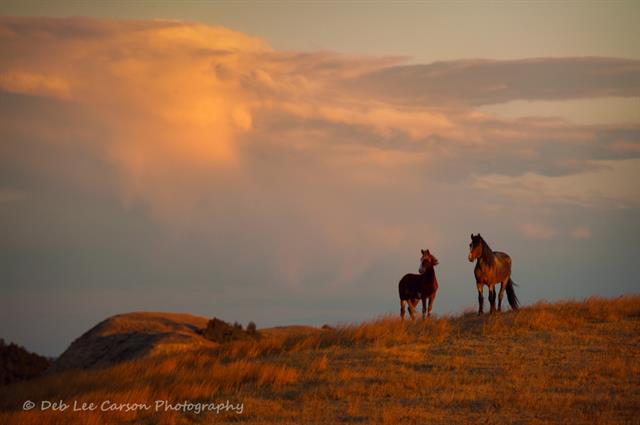 Pinnacles and her smokin’ hot sire, Blaze, right before her capture in April of 2015.