Should move a man as much as doth a son.”
-Thomas Kyd

Grab your coffee….this is the recap of a thirteen mile day, on foot, in the Badlands of Theodore Roosevelt National Park! I just filled my second cup, so here we go! Oh, and I blame Kathleen!

Kathleen is part of the CSU team, here this week, making their trip out to meet the techs and visit the park. On Monday she volunteered to go out with me the next day at sunrise! Sweet another morning lover, finally! That is what we did! I picked her up at 5:30 and away we drove into the rising sun and witnessed the park come to life!

The first horse we saw as the sun warmed the landscape was Gray Ghost. One of Kathleen’s favorites and affectionately titled “The Unicorn” because of his magical qualities! We were not disappointed as the dawn light affirmed his ethereal persona.

From there we went in search of Blaze and the potential of an additional foal in his band. We glassed him from Buck Hill, and Kathleen is the one who spotted them. We drove to the closest spot to hike in from. The weather was one of those brisk mornings where even a winter jacket and gloves are welcome but hard to decide how cold one will really be hiking across the terrain. We bundled up, donned our packs, and headed east off the loop road.

Hiking through the Badlands lends itself to many types of encounters. As we worked our way up to Blaze, chipmunks entertained us, skirting in and out of the rocks, as only chipmunks can do!

Kathleen has not been able to see Blaze on his own turf, she was excited to meet him, and he did not disappoint! We caught him by surprise because he was around the corner of a butte when we found his band. His mares knew we were there. I think he was embarrassed when he came out from hiding and saw us! It was worth the five mile round trip trek to see his reaction! Still no foal but we got better eyes on the mare this time and decided it is going to be awhile yet! Kathleen also met Pinnacles and immediately fell in love!

Back at the car we drove a smidge further and visited Satellite’s band. As we sat with them we noticed they were extremely attentive of something behind us, especially Satellite. Turning around Mystery was bringing his band into view! Oh yes, there was a brief sparring of a white stallion and a black stallion, ending in seconds. They were just flexing and testing or saying hello, however you want to look at it. This venture added more miles to our day (more on that story another day), but we heard the most amazing song as we walked back out. Stopping to soak it in we saw a tiny bird on top of a cedar branch singing his/her heart out with the most alluring voice echoing in the cool morning air! A song neither of us had ever heard, a Canyon Wren.

Again, back at the car, we sit on top of Boicourt looking out with our binoculars for horses. I was hoping to find Sidekick because we knew he had a mare very close to foaling. We saw a band waaayyyyy out, yes waaaayyyyyy out, with a gray mare and black foal! Okay think….no gray horse has a black foal, it looks like Sidekick’s mares, but they are waayyyyy out and I could not absolutely say for sure, but my gut was telling me it had to be them. This is where I blame Kathleen, “Oh yes, let’s go!” she says!!!

We did! As we were hiking down off Boicourt into the Badlands below us, I asked Kathleen how many steps we had in so far! She was sporting one of the Fitbits. She looked and we were at 19,400! Okay then! I texted Lincoln and Melissa who were with Dr. Baker and Julian in other parts of the park, sort of rubbing it in, and we weren’t close to being done yet!

We passed Thunder Cloud and his harem on our way out. We went up and down hills, through deep gullies as we worked our way to Sidekick and we found this little cutie pie when we arrived! We gladly took our packs off and plopped down out of the wind and waited for him to wake up. When he did, he woke up!!! Running, playing, and tormenting his momma! Not just briefly but over and over! When he stopped he saw us sitting next to the butte and worked his way to us, one tiny step at a time, slowly. Oh my goodness! His little face filled my viewfinder and his tiny look of wonder melted our hearts!

Passing the honors of naming him to Kathleen, she choose Bandelier! For the Bandelier National Monument!

This is what the NPS says:
“Bandelier National Monument protects over 33,000 acres of rugged but beautiful canyon and mesa country as well as evidence of a human presence here going back over 11,000 years. Petroglyphs, dwellings carved into the soft rock cliffs, and standing masonry walls pay tribute to the early days of a culture that still survives in the surrounding communities.”

What a day yesterday was, thirteen miles of camaraderie and a new found friend, and it ended with watching baby bison play on the prairie, discovering the owlets had arrived, witnessing a wild band of horses crossing the Little Missouri in the late afternoon light, and having a home cooked meal by Dr. Baker!

Thank you Kathleen! I would walk another thirteen miles with you any day!

Thank you for reading this super long post and I hope you find a thirteen mile friend in your day today!
Deb 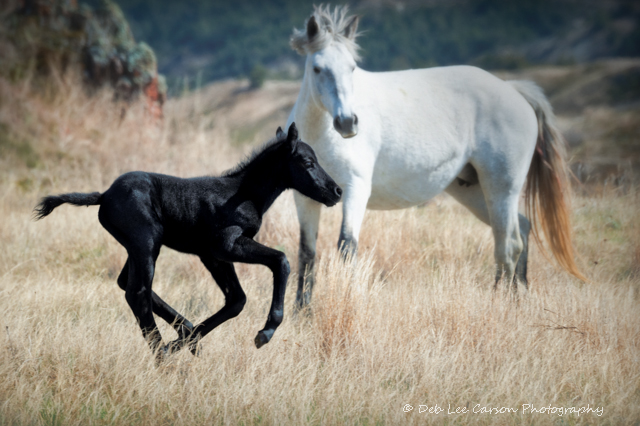 View From The Office
Scroll to top