“Horses are creatures who worship the earth,

As they gallop on feet of ivory.
Constrained by the wonder of dying and birth,
The horses still run, they are free.”
~John Denver and Joe Henry, “Eagles and Horses”

It’s foggy this morning after a wonderful day of rain yesterday. The sun is trying to peel the fog into layers instead of the thick pool that it is.

Have you ever had a moment in your life when you reflect on something that occurs and find the source of why it happened? For me, it was a hat. A hat that was left on the picnic table after a wonderful evening with old and new friends reflecting on the day. If I had not met Sierra this past weekend and she had not left her hat this image would never have occurred! To be able to savor the event with a new friend only makes it even more memorable!

I wasn’t going to go out to the park Monday morning. After meeting Sierra for breakfast to return her hat, we decided to take a drive through the park and see who we could find.

We found three bands near the loop road in close proximity of each other and lo and behold one of them was Blaze, along with Satellite and Red Face. We spent quite a bit of time with them watching the antics between Satellite, Lakota, and Red Face and then each band finally decided to huddle into their respective groups, nose to tail, and fight off the nose flies. We decided to head down onto Lindbo Flats to see who else we could find.

As we descended off from Boicourt to the Flats, we turned around and witnessed the most amazing scene unfold in front of us. It was like it was happening in slow motion but it definitely did not! It was a scene from my imagination taking place right in front of me!

First we saw Satellite pushing his mares along the top of the ridge, then right behind him came Red Face. I thought wow, I sure hope they come down this way, and then, like magic, they poured over the hill like water, Blaze’s band among them!!! Full tilt, dust flying, heads up, ears up, and balls out!!! My stomach was filled with butterflies, my hands were shaking, and I couldn’t decide where to aim the camera! There was just so much going on!

When all 34 horses had streamed by we looked at each other in awe! It was absolutely amazing! Life out here is all about timing! Timing and a little help from above! A moment shared with a new friend and all because of her hat!

Have an awesome day in your part of the world!!!
Deb 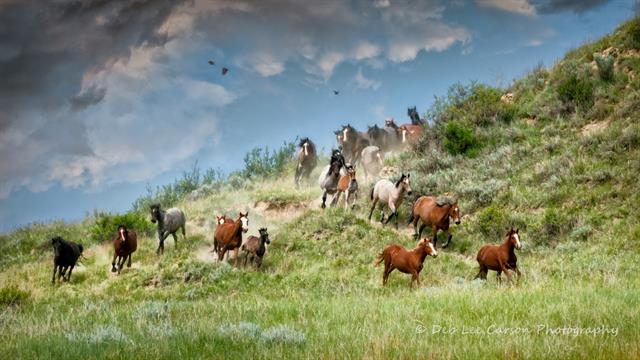