Theodore Roosevelt, who would later establish five national parks and help found the U.S. Forest Service, first came to Dakota Territory as a young man in 1883 to “bag a buffalo.” He tried cattle ranching with no luck, but returned many times over the next 13 years, developing into a confirmed conservationist. It was the rugged badlands that taught him a healthy respect for nature while toughening him physically and mentally. “I would not have been President,” he would later say, “had it not been for my experience in North Dakota.” ~National Geographic Website

I am amazed by the number of people who have never heard of Medora, ND, and also Theodore Roosevelt National Park. I guess I take for granted this incredible piece of land hidden away close to the Montana/North Dakota border. There are three parts to Theodore Roosevelt National Park. The South Unit located along I94 at Medora, ND, the North Unit, 80 miles north of I94 near Watford City, ND, and the Elkhorn Ranch located between the South and North units. All of them connected by the Little Missouri River.

The south unit covers 46,158 acres of deposited sediments carved by the Little Missouri and its tributaries. The south unit is where the herd of wild horses roam in the spectacular erosion of corrugated cliffs, steep and convoluted gullies, dome shaped hills, and majestic prairies. On a good day some of the wild horses can normally be viewed from the 36 mile scenic loop road that begins in Medora and winds its way slowly through the park. You will need a minimum of 90 minutes to travel the road. Of course allow extra time to take in the many vistas along the way, such as Scoria Point, The Ridgeline Trail, Badlands Overlook, Buck Hill, Boicourt Pull Out, Wind Canyon, and it’s really hard to drive past the prairie dog towns without stopping! Having a bad day—the prairie dog antics will fix that!

Besides the wild horses, this austere landscape is home to a surprisingly dense population of wildlife—bison, pronghorn, elk, white-tailed and mule deer, and numerous smaller mammals such as coyote’s, prairie dogs, porcupines, badgers, along with amphibians and reptiles and don’t forget the birds—golden eagles, great horned owls, wild turkeys, magpies, just to name a few. After a rainy spring, a wealth of wildflowers color the landscape popping up in places you would never expect them to grow.

For me, the last couple of months have been spent hiking a large part of those 46,158 acres, mainly east of the Little Missouri, looking for the 19 bands of wild horses and the numerous bachelors on the hunt for their own harems. Many hours have been spent watching their family units, observing their behaviors, capturing their beauty, and trying to formulate a compelling way to bring you their stories. West of the Little Missouri are large groups of bison and elk and of course the remarkable petrified forest! TRNP is one of the top ten places in the world to find petrified trees. The petrified trees belong to many species but the largest stumps (up to 12 feet or 3.65m in diameter) belong to the genus Metasequoia – the Dawn Redwood.

So next time someone asks you where you may want to spend some quiet time, you can truthfully say Theodore Roosevelt National Park, because perhaps best of all is the shortage of one particular mammal—human beings. This relatively isolated park is hardly ever crowded, so you can experience the gorgeous loneliness of the badlands much the way Roosevelt did more than a hundred years ago and the freedom of the wild horses.

Have an amazing day in your part of the world!
Deb 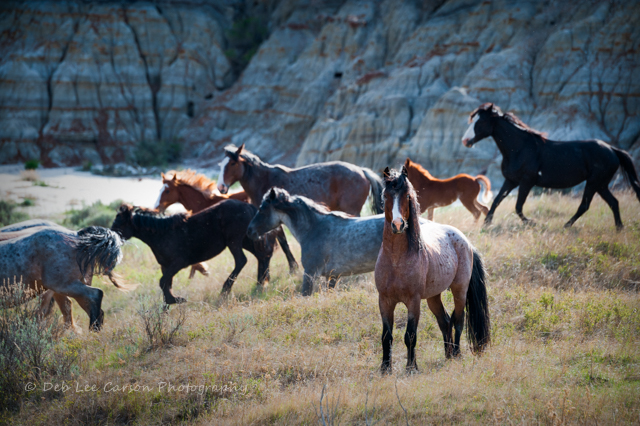 The Future
Scroll to top