“Behind all seen things lies something vaster; everything is but a path, a portal, or a window opening on something other than itself.”

You recall Gray Ghost’s story? He lost his band of mares to a pair of bachelor, brother stallions – Teton and Wild Rye, and another older band stallion. His mares and yearlings were divided between these three stallions. We knew one of the mares, Teepee, with the two brother bachelor’s, is very close to foaling. So our goal on Saturday morning was to find her.

We glassed the band from a high point in the park and immediately spotted the new baby. They were in some of the hardest country to find the horses in. You might be able to see them from up high but once you get moving into that country it is a different story. We miscalculated and ended up further east of them than what we wanted, but we did eventually find them after climbing and descending many, many hills!

As we crested the last hill and got our first glimpse of Teepee and her new foal we applauded Gray Ghost for his creation and felt sad because he wasn’t here to see it. So we settled in to see what was happening in the band and realized that Tanker, Ruby and her yearling had managed to slip away from the other band stallion and now all the mares and yearlings were back together!

The story continues. We also noticed that one of the bachelor’s, Wild Rye, seems to be hanging away from the band, definitely looking outcast. Teepee and her foal are surrounded by several of the mares and yearlings. She is safely inside a well positioned circle and it is quite clear that Tanker is alert and in charge and occasionally driving off Teepee’s yearling who is trying to get close to her momma and the new foal.

We are watching the new foal closely trying to determine health, sex, and age, when Goblin, one of the mares, comes running with Wild Rye right behind her. It is clear Wild Rye is trying to chase her off and claim her for himself. Now it gets intense because Teton is not going to allow it and a skirmish ensues.

We witnessed the two stallions fighting and the mares are milling around and finally Tanker pushes the mares and yearlings together to protect that new baby. The excitement didn’t last long, but Melissa, Lincoln and I looked at each other and went “WOW”!

It was when I glanced through the images I had just captured that the emotion hit me. As the tears welled up I realized what we had just witnessed—the power of a family, the power of a mother’s love, the power of heartbreak and loneliness, and the incredible power of freedom and wildness. THAT is what makes these wild horses so unique and spiritual.

This was a hard image to work on because of that emotion I felt and I hope I am able to portray it to you. I may not have it perfected yet, but I think you will feel what I did!

Have an amazing Monday in your part of the world! Remember that behind all things lies something vaster!
Deb 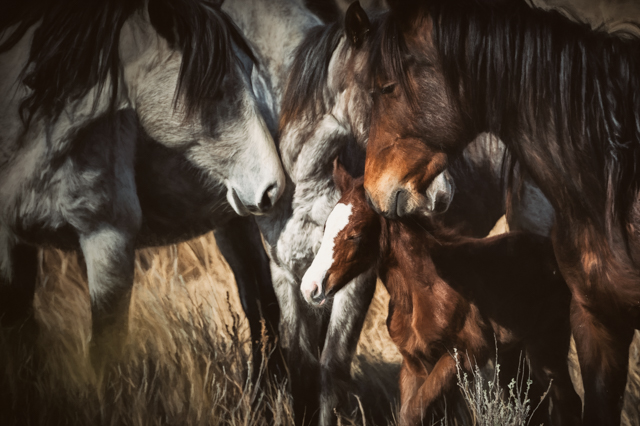