“I care to live only to entice people to look at Nature’s loveliness.”

Young and sweet! All innocence and wildness!

Sometimes their wild and young curiosity just gets the better of them and they move closer to see what we are, only to reel away, like being shot from a bow, at the slightest movement.

I have a friend visiting from South Dakota and yesterday she arrived under heavy cloud cover, cool mist, and a chill in the air. We headed to the park to see what we would see!

We caught a glimpse of a band high on a ridge, so we parked and headed up to see who it was. Eight hours and eight miles later, as the sun touched the western edge of the world, we descended back to reality. We only intended to run (well hike) up, shoot, head back to the car and find more horses.

As we crested the hill and spotted the band, we also had the dreaded bison encounter, not one or two, but a herd. Weighing our options we decided to make a break for a tree closer to the horses and then cross a small valley to another tree and hope for the best. We were out of sight of the herd, except for one who continued to eye us intently, but thankfully they continued their lumbering stroll across the prairie, and we settled into photographing the band. I am now convinced I am a ‘buff’ magnet, and would prefer to be a ‘tick’ magnet. I would gladly pick off thousands of ticks if I did not have to encounter another bison.

As we worked our way across the ridge we could see far below us six bands of horses spread out across the flats and the sky had begun to lighten! Off we went and the rest of the day we witnessed a band disappear in front of our eyes, yearlings causing trouble, foals playing to their heart’s content, stallions snaking wayward mares back to their respective harems, and the best part, of course, was seeing Blaze.

Hiking back out in the soft glow of sundown and as the air was taking on the evening chill, little Denali, a filly who normally doesn’t let her curiosity get the best of her, stepped into the golden light and gave us a look. Her natural loveliness and wild innocence were just the right way to end the day!

Have an awesome Friday in your part of the world! Thank you all from the bottom of my heart for your continued support of this amazing journey to Fly Without Wings!
Deb 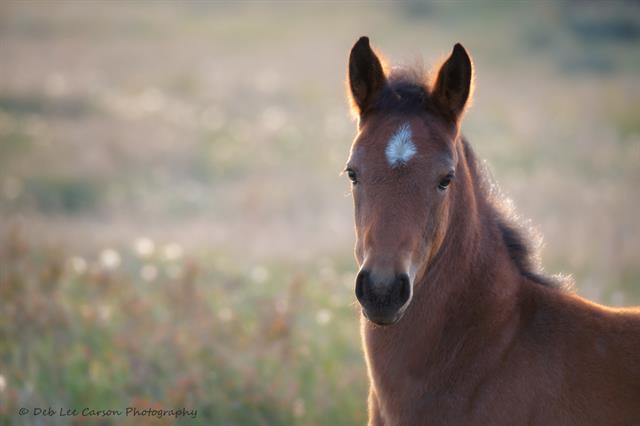