“They are more beautiful than anything in the world, kinetic sculptures, perfect form in motion.”

Yesterday it rained! Beautiful, soft, soaking, life giving rain! A perfect day to stay inside and catch up! But I could not. I was pulled to the park at the early morning hour. I was only going to check on a pregnant mare and come back in.

Driving into the park, I rolled the window down and smelled the land! The fragrance of the earth was musky and rich! The raindrops were releasing the spicy scent of the silvery, green sagebrush, the air was heavy and permeated with the badlands coming alive!

I waved at one of the rangers doing his morning check of the park, the only soul I saw at that rainy hour of the day. One of the small gifts of being out early is the chance to savor the solitude.

Easily finding the band I needed, I was somewhat disappointed there was no foal, but thankful and hopeful she would wait til the weather moved through. Driving further on, were several bands standing on the ridge! Sweet! I will watch for a bit and head back in.

So began the day in the life of the band stallion, Red Face. He was kept busy by his harem. He had a yearling filly and one mare who thought it would be interesting to visit the small and mighty mosquito, Satellite! On the other side was band stallion, Cocoa, quietly taking it all in, watching and waiting until Red Face’s little, black mare, Lakota, paid him a visit. Off goes Red Face to bring her back, scolding her on the way. Pretty Girl’s colt, Yosemite, was fast asleep during it all and when he woke up he was a bit dazed and wandered over to a mare and stallion from another band and got spanked for the effort. He went crying to his mom!

Two hours later everyone was finally quiet and the rain was coming down steady now. Making my way back to the car, I thought wow, what if I had stayed in my room because of the weather? How boring that would have been!

Have an awesome day in your part of the world! I hope you enjoy this image of Red Face defending his harem! Thank you from the bottom of my heart for all your support!
Deb 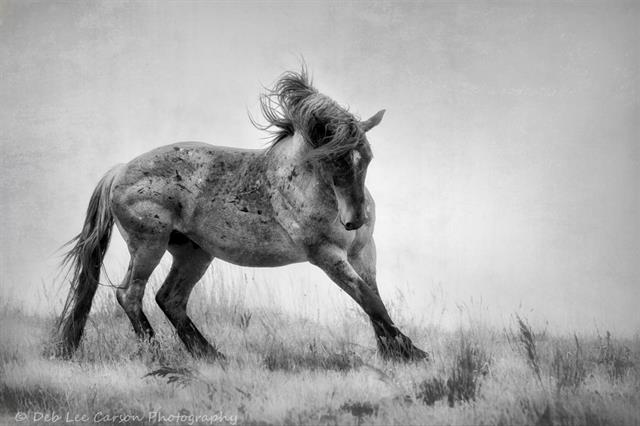 The Colour of the Spirit
Scroll to top