Yesterday was a productive day and amazing!

We first headed to the south of the park looking for Gary and Grey Ghost. We decided to hike up on to Ridgeline to see if we would get lucky. The view from there covers the southern part of the park and we weren’t disappointed. Not only did we start our day with a climb, but we find Gary’s band on a big, grassy butte. Close but far, if you know what I mean. Too difficult to get to from Ridgeline, maybe easier to access from the interstate. We opted to find him again at the end of our day and off we went.

We revisited Cocoa’s band who were right on the loop road. Little Lassen is growing like a weed! Finished with them and drove to Buck Hill.

We made Lincoln the spotter for the day and he did AWESOME! From Buck Hill he immediately spotted a large band of horses. Between the three of us we determined it was the pitter-patter man himself, Blaze! Off we went. He was a hike in but only three deep gullies to cross.

We slowly approached the band and what does Blaze do? He lays down and takes a nap! WTH! He was suppose to show Melissa, who had not met him yet, how awesome he is! You know, the impressive, I’m the big, wild stallion show he normally does! Geez!

We did our work, Blaze wakes up, and decides to step up on a knoll and look down on us. My heart went pitter-pat and yes he still ranks #1 in my book!

Onward with our day we stopped near Boicourt to glass for Silver’s band who has a mare, Firefly, very close to giving us a new baby. We saw four horses so far away they were specs in our binoculars and we couldn’t say for certain who they were, so away we head, back to Ridgeline at the south end of the park, to see if Gary was where we left him early in the morning.

Hike back up Ridgeline and low and behold he is RIGHT where he was six hours before. Remember the RIGHT part. Still the best way to get to him is from the interstate. Out of the park we head to finish our day!

We park where we think he is going to be and head out into the park. This end of the park everything is straight up! Yep straight up! Nothing easy about it, except when we come back it will be straight down!

I’m hoping my calculation is correct and he is on top of the butte above us. We finally climb where only wild animals are suppose to be and that stinker has disappeared. Vanished. He was suppose to be RIGHT here! OMG….all the way across the butte I am saying things under my breath that can not be said out loud! We keep walking and walking and walking. Finally, way BELOW us is Gary and his band!

The band was on the move and we trailed them for a short time. When we came around a corner they had settled into an amazing spot with the light pouring down on Ghost, the oldest mare in the park. Born in 1992. At that moment I forgave Gary for moving his band.

Have an awesome day! It’s going to be hot and windy here today! Thank you as always from the bottom of my heart for your support!
Deb 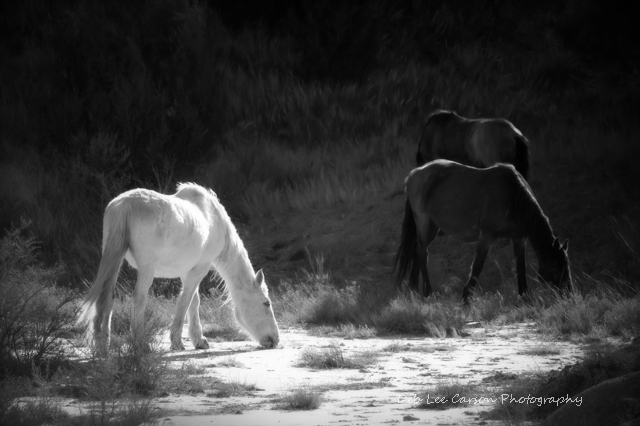