It was -11 degrees at 7:00 yesterday morning when we headed out in search of the wild horses of Medora, located in the depths of Theodore Roosevelt National Park.  We were lucky to find Cloud and his tiny band fairly close to the main road, but the bachelor stallion Circus was more difficult as he was playing hard to find across the frozen Little Missouri. I caught a glimpse of his stark black and white against the blue of the sage as we were driving out of the area.  He is one of the most striking stallions in the park.  I have never figured out why the girls (mares) don’t find him as attractive as I do.  He played hardball and took off but I was persistent and stayed with him until he quieted down enough to capture this image. 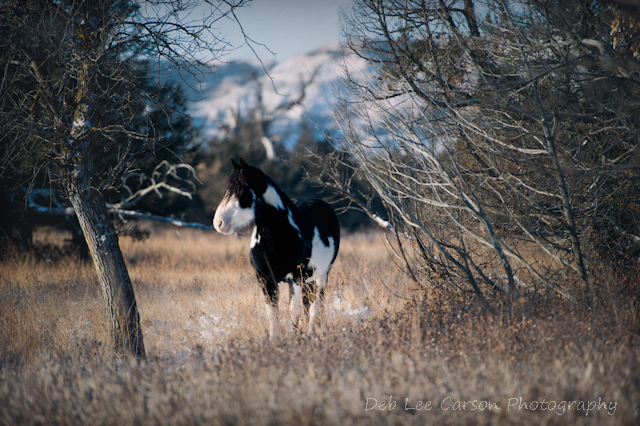 In the afternoon we drove to the eastern edge of the park, loaded down with food, water, and camera gear we shimmied over the boundary gate and started on foot across the flats to the abyss of the badlands. We had no idea if we were going to find any wild horses, as they have 110 square miles to roam free in.

The wind was brisk and the air temp was still well below zero.  When we got to the edge of the badlands and glassed the terrain 200 feet below us, I said to my husband look over that way.  Off to the north and west about 1 1/2 miles was a fairly large band of horses.  Based on its size I was hoping it was going to be Thunder Cloud but they were far enough away we could not make out which band it was.   I really didn’t care who the band was, I was stoked we were blessed to see horses!  We agreed on a route down into the badlands and off we went.

If any of you have ventured into the back country of any type of wilderness area you will understand what appears to be easy terrain from a distance quickly becomes challenging as you get closer in.  Yesterday was no exception.  We would stop and get reoriented, glass again the location of the horses and continue down through the steep, frozen arroyo’s and up and over the hills of the land.  The hills were like ice skating rinks hidden under the layer of snow and there was more than once we went skidding.

We had been hiking for well over an hour by now and when we stopped to glass the band this time, I was ecstatic, it was Blaze!  My favorite stallion!  Now I couldn’t wait to get to them but immediately start praying he was going to let us get close!   I said to Michael, “You are in for a treat!”

There was one more hill to get around.  As soon as we did the horses saw us!  Blaze, head up immediately came at us and his mares starting milling around, nervous, and watching.  We slowly made our way toward them and realized we could not get as close as we wanted because of one huge arroyo with steep sides.  If I moved down into it the horses were going to be gone.  They were already upset.  Patiently, in the freezing wind and cold we waited for them to quiet down.  Finally I decided I needed to try and get across to them and slowly headed down, Micheal staying on top and telling me the best route to get back out.

Blaze was having nothing to do with it and was running back and forth.  His mares too. They finally decided enough was enough and headed north.  I told him thank you and said I would see him again in the spring!

Michael crossed over and we discussed the quickest way to get out of the badlands as the sun was setting fast, we were tired, and it was darn cold.  Our route out was shorter, but not easier.  What looked like an easy hill out, ended up being a vertical climb.  There was only once I wanted to turn around but the longer option didn’t appeal to me, so we sucked it up and crawled up the hill.

As we hiked back across the snow covered prairie and grouse would pop up and fly off into the deep pinks of the twilight sky I thought to myself, life doesn’t get any better than this and it is so awesome to be alive!

Thank you Blaze for your embodiment of the true wild horse spirit!  Your images will always be exciting
to me! 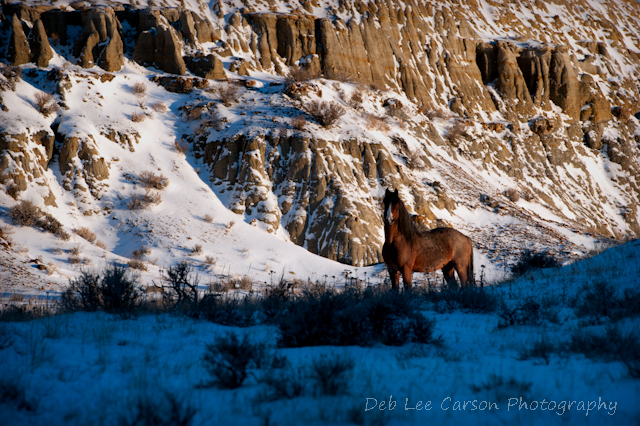 Until the next time!  Thanks for reading!

Fly Without Wings – The Journey Begins