Early Thursday morning I found the pitter-patter stallion, Blaze, high on a ridge a couple of miles into the exterior of the park. He was a tiny dot on the horizon line. His band was spread over a large area. Some of them on the ridge with him, five of them in a valley east of him.

Hoping to see a new foal, I moved up to the easier five to get to. Gosh darn, that mare still wasn’t ready to present the world with fresh life, but she is definitely reaching the boiling point! Blaze was keeping a watchful eye from his high vantage spot.

Suddenly, the mares spooked and moved off. Well Blaze didn’t like that and I watched him roar off the ridge line and disappear into the gully below. Ahhhh, I thought he is going to come right by me on the run, I better have my camera ready! Standing there, my hands shaking, I waited. But he didn’t…for several minutes I didn’t see him. The mares are looking up high and I think, “That stinker, he has gone to the ridge top above and he is going to sneak in from behind me.” So I worked my way up the valley to intercept him there. But no….he still isn’t coming. Finally, slinking up from the bottom of the valley is Mr. Magnificent himself.

Like a giant panther he works his way toward the mares and quietly drives them up the valley onto a small butte above. As he continues to push them, the aberration that spooked them appeared, Mr. Huge Bison! Not again! Now I am trapped on the side of the hill with a very large bull glaring down at me.

Nowhere to go and watching Blaze push his mares to the top of another ridge and stand there looking back at me, I thought, “Blaze is laughing at me, I just know it.” With a shake of his gorgeous, Fabio hair he takes his mares out of sight! The buff snorts one last time and lumbers his huge body into the morning sun and I take a deep breath and say a silent thank you for all that I just witnessed!

I hope you enjoy this long story about the stallion that makes me tremble with excitement. Even working on his image, my stomach gets butterflies!

Thank you from the bottom of my heart for all your support! Find that something in your life which gives you raw joy when you see it and soak it in!
Deb 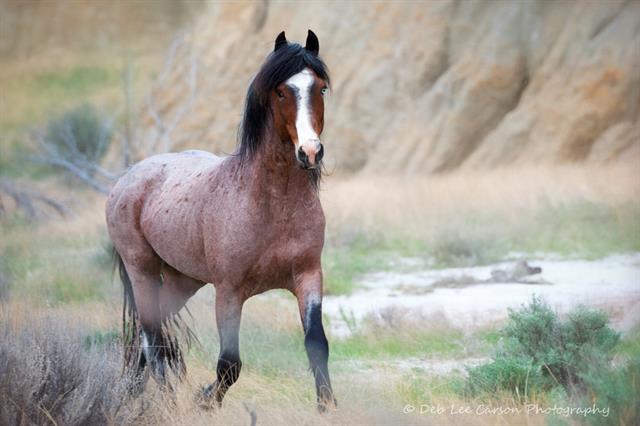