“Determination that just won’t quit — that’s what it takes.”

All I can saw is WOW! The effort and energy and determination in this wild, bachelor stallion is indomitable!!!

Here is the story that unfolded beginning at 7am:

Finding Wind Canyon, a recent bachelor stallion losing his mare and yearling to Coal, parked alongside the loop road in the early morning is where it started. I jumped out to grab a couple of shots of him with the cool, morning light covering him. He was intently watching something, so I looked further up the slope and saw Copper. Copper was also intently watching something and I finally spotted backs of horses just over the ridge. About that same time I heard a cough.

Huh…was it a horse? Listened intently and heard it again. Oh, now that is definitely human. I could not see anyone. I drove further up the road and saw Chad’s car (Chad lives close by, an avid photographer, and fun to hang out with). Sweet….someone to chat with!

As I was hiking up to where I thought Chad would be and to get better eyes on the band on the ridge, over the hill at lighting speed are two stallions running for all they are worth! Copper the obvious one being pursued! That’s when I saw Chad grabbing images of them!

Chad filled me in on the drama that had already unfolded! Wind Canyon had taken on the band stallion, Thunder. Very intently and Thunder held him off. Along came Copper who drove off Wind Canyon, and now the day’s drama is well established. From where we sat high above them, Copper would make his way slowly toward Thunder, and Thunder’s bubble would finally burst and off they would go over the ridge. They would not just run over the ridge, Thunder would push him for more than a mile and then make a stand and push him some more! Again and again.

It is very obvious that Thunder’s earlier wound from last week still has him with a distinct limp and his wound has increased in size and is weeping. Combine that with Copper’s prior injury from 2014 and you have two warriors with the same abilities. I believe Copper knew Thunder was at a disadvantage.

Why you ask is Copper being so intent? Because of the injury Copper received last year, he lost three of his mares to Thunder. Copper is finally making his play to get his mares back.

By now it is 9:30 and I really have to go find Blaze. I wished Chad luck who was opting to stay and see what happens. Off I go. Finding along the way Wind Canyon, Singlefoot, Arrowhead, and Vamoose, all bachelors, have congregated around a stud pile. I stop for a few minutes to see what ‘the boy’s’ are up to.

As I am sitting there, I can see Copper and Thunder on a far ridge going balls out! Then I witnessed them going up against each other on their two hind legs and pirouette around again and again like dancers! I am stunned! Wow! Just Wow!

Gosh I HAVE to go find Blaze and check his mares, which was not an easy task. Drove to Buck Hill, no sign of him through the binoculars. Have a hunch so I drove to where I could hike into Sheep’s Butte and of course that is where he is. Way east of there along the north boundary of the park. Three hours later and three bull bison, I am back at my car, super tired, and ready to head out of the park.

I texted Chad to see what happened with the studs. He said nothing happened he had left them at 11:30 and they were eating grass. Heading out of the park I stopped to glass one spot for Thunder and saw him with Copper still in tow! About a twenty minute walk out.

Another stallion close by made a move on Thunder’s mares, and Copper used that to his advantage, but failed.

By now both stallions have bloody wounds, sweating, even though it is a cool day, and both appear exhausted but not willing to give up. Copper is at least a hand taller and much longer than Thunder, but that little package of muscle is not letting go of his mares easily.

When I left them last night they appeared to be at a draw.

Have an awesome day in your part of the world. The wild world of horses is amazing! Thank you as always for your support!!!
Deb 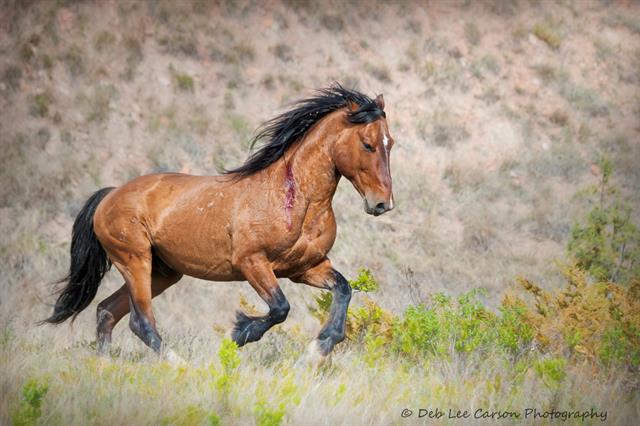 The Colour of the Spirit

A Mother’s Love
Scroll to top