“Challenges are what make life interesting and overcoming them is what makes life meaningful.”

My job as a research tech here in the park is down to finding one band a week. Of course I choose Blaze!!!

Yesterday I hiked out to him in the late afternoon. I couldn’t glass him from Buck Hill, so I opted to do a blind hike hoping he was in his ‘normal’ area. I had to detour from where I would usually head in because ‘all’ the bison in the park were right where I needed to climb up to the north ridge.

Okay, they win, so I went Blazes way. One day, many weeks ago, I watched Blaze take his band up the side of a butte I thought would be impossible to get up. Since then, I have used his way twice to get off the loop road and on to the ridge top. On top hiking along, I finally spotted him. He ended up being a 40 minute walk out but it was along one of the prettiest views in the park so I didn’t care one bit!

Had a brown racer snake give me a start as he raced through the grass at my feet. They are fast and usually a glimpse of their tail is all you get. Enough to make a person jump and yelp!

Blaze was his handsome, pitter patter self and his yearling boys were practicing being big boys! So much fun to watch them play fight. Their agility is amazing!

Have an awesome weekend in your part of the world, and a big thank you to Carol for providing the quote for this image of Blaze’s two yearlings! It seemed fitting as they begin facing the challenges of life in the wild in Theodore Roosevelt National Park!
Deb 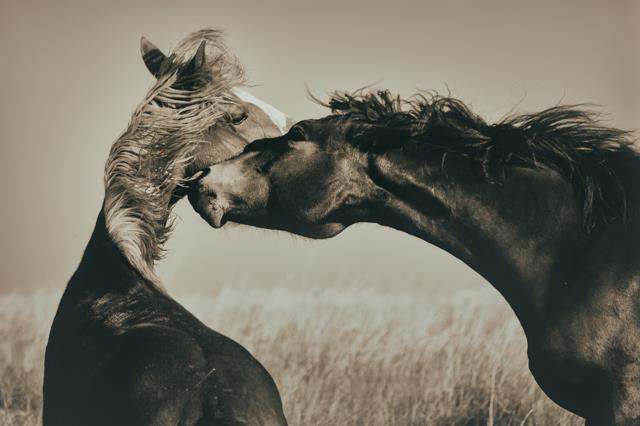 Dust of My Dreams

Full of Spirit
Scroll to top