As we continued to search for the missing three, Diamond eventually presented her sweet, lovely self from behind a small raised area of bentonite sprinkled with scoria. Diamond stepped out like she was the Queen of Sheba. Many more minutes passed and we were getting worried, when finally there was a collective, “There they are!”

Domino we could see as plain as day with Urban approximately 25 yards behind. Domino daintily walked over the top of the area Diamond had come out from behind! But wait, what was that? A glimpse of tiny legs trailing closely behind Domino and as they drew near the cutest little foal EVER revealed herself!! Oh my, I was spellbound!

Tiny, already with an attitude and oh the color! Sorrel and splashed with white like someone had taken a paintbrush and flicked it up and down her legs, belly, and face! And look…a blue eye, just like her smokin’ hot sire, Blaze, but instead of his intense left eye, hers is the right! And oh, her left eye, wow….dark with a minuscule fleck of blue! A sorrel, sabino, with a blue eye and flaxen mane and tail! Smitten yet? I was!

Domino was having nothing to do with us getting close to that colorful filly and off they went after lining out the older sibling, Urban. Not because Urban did anything wrong, but because the filly went over to check him out!

Now what do you name this wee package of color and attitude? The CSU naming theme for 2015 was national parks! After much thought and discussion and research, Pinnacles seemed the most fitting option and what finally tipped the scale in that direction was the definition of the word pinnacles: “a high, pointed piece of rock.” I kept coming back to the markings on her legs, all jagged and zig zag, combined with Pinnacles National Park which was born of lava and fire, and of course her smokin’ hot sire with the name of Blaze! So Pinnacles she became.

Over the next weeks and months I watched her grow and change and become her own little personality. She loved to torment her big brother, Urban. Teasing and fighting with him, and the three of them moved as a unit—Domino, Pinnacles, and Urban.

Sometime in May Blaze and his band joined the summer festivities on Lindbo Flats. A place on the northern boundary of TRNP, named after a local family, where it is easy to find the largest congregation of bands during the summer and fall months. It is often a huge party! Or at least I like to think the bands gather and celebrate summer because winter is hard, harsh, and the main objective is to exist and find forage. Kind of like our summer’s gathered around lakes and beaches! Blaze kept himself well to the east on the flats a long way from prying eyes, with an occasional trip to the Boicourt Ridge (another place in the park named for a local family) especially when the nose flies got bad.

About this same time the park was starting to gather yearlings for adoption and later on in the year, weanlings. In the back of my mind I knew Pinnacles would never leave the park because Blaze would maintain his aloof habits, and never allow himself to be in an area where she would be captured! So on June 25th, 2015, I said goodbye to the wild ones, not sure when or if I would see them again. 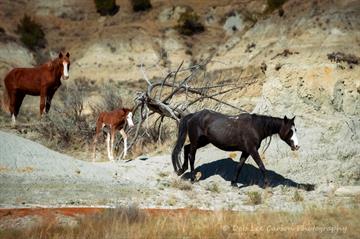 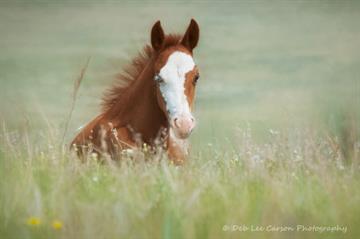 Pinnacles, one month later on May 13th. 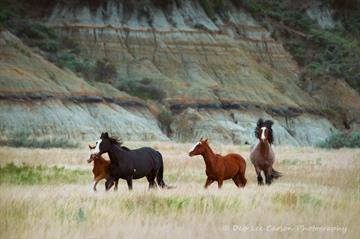 Arriving on Lindbo Flats for the summer! Pinnacles,her dam, Domino, her full brother, Urban, and her smokin’ hot sire, Blaze, bringing up the rear.