Moving to Medora, ND, to begin work on the Fly Without Wings body of work and also as a research tech for Colorado State University (CSU) on the equine contraceptive study in March of 2015, little did I know how much Blaze was going to become a part of the weekly routine in only the way that he could.

One of the first mornings on the job, we found Blaze, under the tutelage of Marylu Weber from North Dakota Badland’s Horse (NDBH), by using a monster spotting scope by the name of Big Bruiser. Lincoln, CSU research tech from Chicago, and I, along with Marylu were on Buck Hill and Marylu was able to get Big Bruiser sighted in near a butte we, or I, began to call Butt Crack, yes…that is correct (I will leave that to your imagination!). We would take turns looking through Big Bruiser and could see Blaze and young, bachelor stallion, Vamoose sparring! They were tiny specs even with the help of that monster scope! Observing through the scope my heart pounded, my stomach was in knots, and I wanted to be an eagle so I could soar across the distance and watch! I finally had to quit, I couldn’t take the suspense! There was the Blaze I remembered from 2012!

Blaze kept his harem in an area of Theodore Roosevelt National Park (TRNP) that was remote and rugged. There is a long, undulating ridge that runs along the northern tier of the park and he had a penchant for hanging out on either side of it and often on buttes with dead trees or in deep valleys surrounded by cavernous arroyos. If you were lucky you could glass him from the tallest point in the park, Buck Hill—starting from Fuzzy Top (an unofficial name given to a distinctive landmark in that area—again, please feel free to use your imagination!) and working east to where the floor of the badlands joins the grasslands above. Glassing requires a lot of patience, a good pair of binoculars, steady hands, and a familiarity with the size, shape, and color of the wild ones, or what looks out of place or doesn’t belong, and then determine if it is a wild horse versus a horse rock or horse tree!

We were new to this country and the wild ones were quickly teaching us all there was to know about the rugged, historic landscape of TRNP! One of our tasks as research techs for CSU are to monitor the foaling rates of the wild mares and that means finding them weekly, using our experience, knowledge, and skill to determine who is pregnant and finally, monitoring them closely when we knew they were going to present us with a foal.

After several weeks on the job we knew Blaze’s pretty little black overo mare, Domino, was getting close to foaling, so midday on April 17th, 2015, we headed to Buck Hill to see if we could glass him. It took the three of us, Melissa, CSU research tech from Colorado was now with us, to finally glass him north and east of Fuzzy Top in a valley, but we couldn’t see the entire band. Getting our bearings we parked at Upper Talkington and headed east into the backcountry. From Buck Hill the badlands look level and inviting, but the landscape quickly teaches you she is in control! Up and down and around and through we went until we found the beginnings of Blaze’s harem.

Blaze roared up to us first, checking us out and doing his classic Blaze moves—head up, mane flying, blue eye ‘blazing’, but after he realized we were not a threat, he relaxed and sauntered off, or slinked away, as only Blaze can do! Next we found Orphan’s Blue and her yearling filly, Reba, then behind was Papoose and her yearling boy, Sebastian. Off to one side was Little Brother’s Girl and her handsome yearling boy, Evans, and of course the infamous, Escape who Blaze decided to be amorous with and she squealed and kicked and said no way, driving Blaze off!

Looking around we could not find Blaze’s lover mare and first in command, Diamond, nor the mare we were hunting for, Domino and her yearling son, Urban. The area we were in was lined with a deep gulch zigzagging through the valley like veins running across the back of your hand, and we had to work our way to a higher point to get a better view. Still no sign of Domino or the other two….uh, oh… 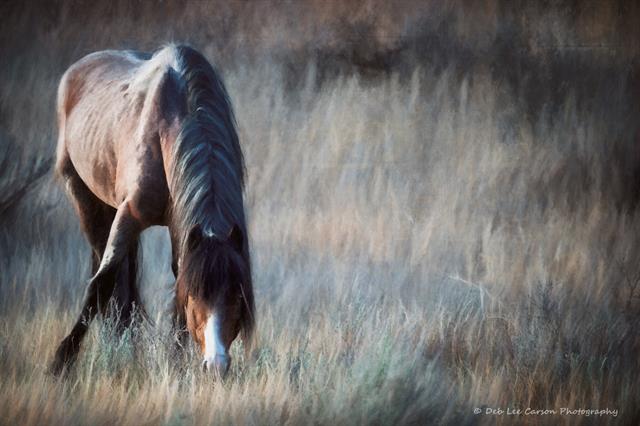 (Wild, band stallion, Blaze in the back country of Theodore Roosevelt National Park.)