A few million years of powerful explosions, lava flows, and landslides created a 30 mile wide volcanic field. This field of fire was then split down the center by the San Andreas Fault and the west side traveled 195 miles north at a rate of 3-6 centimeters each year, all the while being worn away by water, weathering, and chemical erosion! The result of these millions of years of fire, ice, and upset are the serene rock formations in a landscape unlike any other now called Pinnacles National Park.

Is that where this story begins—a few millions years ago? Or did this story begin in October of 2012, when a horse lover encountered the spirited, wild stallion Blaze, or was it in October of 2014 in a barn at an event called Celebrate the Year of the Horse, or was it born in July of 1957, when a little girl arrived to a family living on a farm surrounded by horses? How do you discover where a story really begins?

For our story we are going to start on April 17th, 2015 in the backcountry of a landscape also formed millions of years ago. Surrounded by clinkers, lignite, buttes, deep arroyos, grasses, and sage, a wee, tiny, essence arrived to the animated, wild, stallion Blaze and his sweet, gentle, harem mare Domino, in a land filled with deep history and a spiritual backdrop called Theodore Roosevelt National Park.

Her name became Pinnacles and this is her story!

The wild stallion Blaze, who is he? He is noted for his one blue eye and flying black mane, his slinky way of stalking you, and his ability to make a human tremble (well me anyway) with excitement. The first time I happened upon Blaze was late in November of 2012 on the Upper Talkington Trail a couple of miles into the badlands of TRNP. It was a cold, overcast day and the cedars were topped with frost.

We spotted each other at the same time, I through my binoculars and he with his innate sense of smell and sight. His head swung up, his luxurious black mane went flying, and he stared! My heart quit beating wondering what he would do, when he swung around and headed toward me—on a dead run, bringing the entire band with him! Screaming to a halt several hundred yards away, he stalked my perimeter, staring and I stared back, frozen, couldn’t move, heart beating out of my chest, watching the sheer power of that magnificent roan stallion!

Finally, he stopped, just enough higher than me to make me feel insignificant, and he assumed his infamous one leg cocked pose and watched and watched me. If I moved his head would swing toward me and that blue eye would pierce your inner core, he would never let me get within a hundred yards! His bubble was large back then, as human pressure on his band had been minimal, so his wildness was genuine and heart stopping! I was smitten and haunted, forever marked by the wildness which erupted from his eyes when he would swing his head to stare you down. 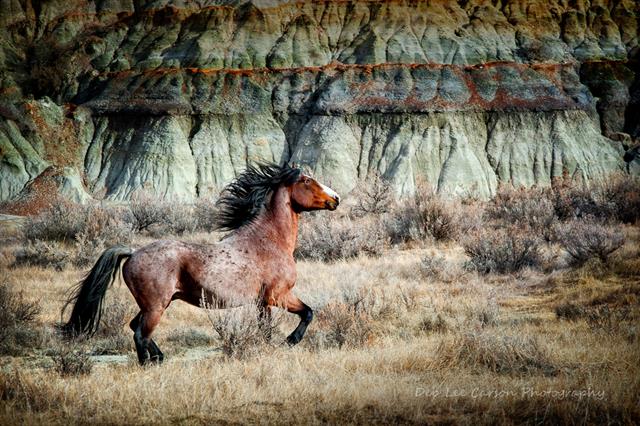 (Wild, band stallion Blaze in the backcountry of Theodore Roosevelt National Park in October of 2012)